ImgLib2-Imaris-Bridge provides arbitrarily large images that are shared between Imaris and Fiji/ImageJ2, without duplicating memory requirements. We focus on big (larger-than-RAM) images, for which both Imaris and ImgLib2 provide sophisticated caching infrastructure. On the ImgLib2 side, we represent Imaris datasets as lazily cached tiled images – image blocks, when they are first accessed, are retrieved from Imaris through the ImarisXT API and cached. Importantly, these images are both readable and writable. Modified blocks are persisted back to Imaris before they are evicted from the cache. (Imaris then in turn persists modified blocks to disk when they are evicted from its cache).

Technically, ImgLib2-Imaris-Bridge exposes the ImarisXT interface as an ImageJ2 Service, providing easy access to running Imaris applications and opened datasets. Note, that this service only covers parts of ImarisXT that are relevant for image data. (Of course, the ImarisService provides full access to the underlying ImarisXT proxies. But only the image-related subset is wrapped in a “imglibby” convenience layer.)

For convenient access to spot detection, surfaces, and other un-related features, have a look at EasyXT from EPFL BIOP. (EasyXT and ImgLib2-Imaris-Bridge can be used concurrently without difficulties.)

If you have both Imaris and Fiji running (otherwise you won’t care…), it’s easy to start playing with ImgLib2-Imaris-Bridge:

Open a dataset in Imaris.

In Fiji, activate the update site “ImgLib2-Imaris-Bridge”. (See this guide for how to activate update sites).

In the interpreter, type app = imaris.getApplication(). This tries to establish a connection to Imaris, and should result in something like

If it fails (for example because no Imaris instance is running), you will get an exception.

To get the image currently opened in Imaris, type dataset = app.getDataset(). This will return an ImarisDataset, which wraps the Imaris image.

ImarisDataset caches image data for reading/writing from/to the wrapped Imaris image. It provides several views on this data: as a plain ImgLib2 Img, as a standard IJ2 Dataset with meta-data, or as multi-resolution BigDataViewer sources.

For example, to show the IJ2 Dataset in the Fiji UI, type ui.show(dataset.asDataset()). To show the sources in BigDataViewer, type bdv.util.BdvFunctions.show(dataset). 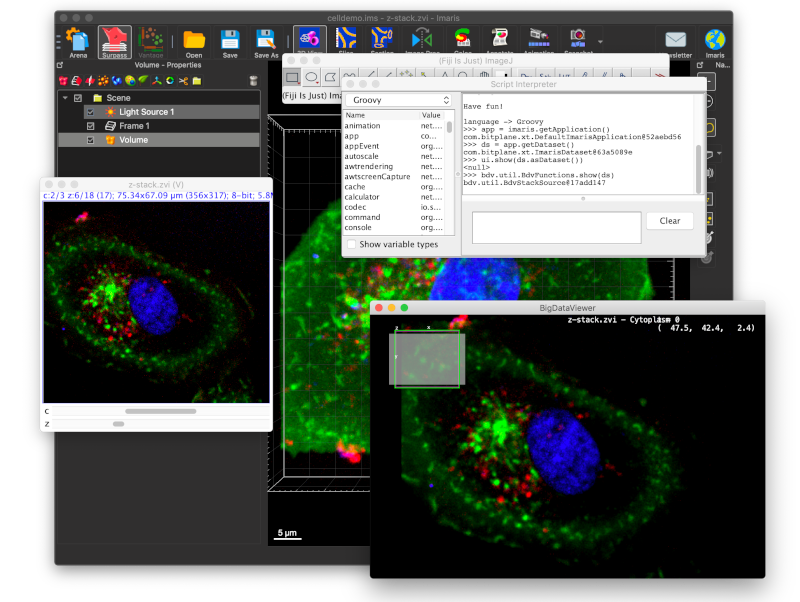 To use the ImgLib2-Imaris-Bridge ensure that you have a license for the ImarisXT API as part of your Imaris license.

For developers, the Maven GAV is

To start, you need an instance of ImarisService. ImarisService connects to the ImarisXT API, giving you access to the running Imaris instance(s) (ImarisApplication).

There are several ways to get the ImarisService.

If you are writing an ImageJ2 Plugin, you just declare that you need ImarisService by putting an annotated field

which will be populated for you by the framework.

Similarly, if you are running from a script, put an annotated variable

If you are running a stand-alone java application, create a SciJava Context and ask for the ImarisService

Getting an existing dataset

Use ImarisApplication.getNumberOfImages() to get the number of images currently loaded in the Imaris application.

Then, use ImarisApplication.getImage(imageIndex) to get the Imaris image at a particular index (and wrap it as an ImarisDataset).

Or use ImarisApplication.getDataset() as a shortcut to get the first image (and wrap it as an ImarisDataset).

Use ImarisApplication.createDataset(...) to create a new Imaris dataset (and wrap it as an ImarisDataset). There are some intricacies related to mapping between Imaris and ImgLib2 data types and dimensionality, which are discussed below. ImarisDataset are by default writable: You can use them for computation results that are communicated back to Imaris. Newly create datasets are not immediately visible in Imaris. You have to use the following methods to make them visible.

Showing a dataset in Imaris

To make a dataset visible in Imaris, you have to call ImarisApplication.setImage(imageIndex, dataset) This will set the visible image at index imageIndex in the Surpass view to dataset (there can be multiple images visible at the same time).

Or use ImarisApplication.setDataset(dataset) as a shortcut to set the image at index 0.

ImarisDataset wraps IDataSetPrx and represents an Imaris dataset. This is where the meat of ImgLib2-Imaris-Bridge is. The Imaris dataset is wrapped into an ImgLib2 CachedCellImg that is both readable and writable. Data is lazy-loaded from Imaris – image blocks, when they are first accessed, are retrieved through the ImarisXT API and cached. Modified image blocks are persisted back to Imaris before they are evicted from the cache. (Imaris then in turn persists modified blocks to disk when they are evicted from its cache.)

ImarisDataset provides various views on the image data, each of which is useful in different contexts in Fiji. All the different views are backed by the same common cache. There is no duplication of image data, and modifications to any one of the views are visible in all other views.

First, there are views on the full-resolution image (level 0 of the Imaris resolution pyramid):

Besides that, ImarisDataset also implements BigDataViewers ChannelSources interface, which can be used in BigDataViewer and plugins built on top of it. The nice thing about this representation is that it

The generic T parameter of ImarisDataset<T> is the ImgLib2 pixel type of the dataset. Imaris supports 8-bit, 16-bit, and 32-bit floating point images. The corresponding ImgLib2 types are UnsignedByteType, UnsignedShortType, and FloatType. (When creating new ImarisDataset, one of these types must be used).

This is where it gets a bit complicated…

Imaris images are always 5D with XYZ, Channel, and Time axes (in this order). So for example, in Imaris, a 2D image (without channel or time) is represented as 5D with size=1 along the Z, C, T axes. Conversely, in ImgLib2, there is a distinction between a 2D image and a 5D image with size=1 along the 3rd, 4th, and 5th dimension. Therefore, there are several ways to represent an (effectively) 2D Imaris dataset in ImgLib2 (as 2D, 3D, 4D, or 5D). Which way is desirable depends on the usage scenario.

ImarisDatset supports all possible mappings of dimensions. You specify which one you need when creating a dataset, or getting a dataset from Imaris.

A new dataset is created by ImarisApplication.createDataset(type, sx, sy, sz, sc, st). The type argument is either UnsignedByteType, UnsignedShortType, or FloatType. The sx, sy, sz, sc, st arguments specify the size of the new dataset along the 5 Imaris dimensions XYZCT. To indicate that a particular dimension should be left out of the ImgLib2 representation, you set the argument to 0. So for example createDataset(new UnsignedByteType(), 1000, 1000, 1, 1, 1) and createDataset(new UnsignedByteType(), 1000, 1000, 1, 0, 0 will create identical datasets on the Imaris side. However, the first one will have a 5D representation in ImgLib2 (e.g. dataset.asImg()), while the second one will have a 3D representation.

When wrapping an existing dataset, for example through ImarisApplication.getDataset(), by default axes with size=1 will be stripped from the ImgLib2 representation. So the dataset created through either of the above calls would have a 2D representation. You can override this by specifying that certain axes should always be included, even if they have size=1. You do this by providing additional options (more on that later). For example, getDataset(ImarisDatasetOptions.options().includeAxes(X, Y, Z, C, T) ensures that you always get a 5D ImgLib2 representation.

In particular, you can specify that certain axes must be included in the ImgLib2 representation (as discussed above).

Besides that, you can also configure

but usually it should be fine to just go with the defaults. For details, please refer to the ImarisDatasetOptions javadoc.

As an example, this is how you would get the current dataset with

When pixels are modified, the changes are not immediately visible in Imaris. Changes are batched into blocks corresponding to cells in the CachedCellImg representation. When a pixel in a cell is written, the cell is not transferred immediately because more changes in the same cell are to be expected, and it would be very inefficient to transfer the same block many times over, for each one-pixel modification. Instead, the block is merely marked modified and transferred only later, when it is evicted from the cache.

This means, that it can take a long time for changes to “naturally” show up in Imaris. In fact, some changes might never show up if, for example, Fiji or Imaris are quit before the cache eviction happens. Therefore, after you are done writing a ImarisDataset, you should explicitly persist all changes to Imaris using ImarisDataset.persist(). The persist() method blocks until all current changes have been made visible to Imaris. There should be no concurrent modifications made to the ImarisDataset, while persist() is running.

In particular, this illustrates how to get the ImarisService from an net.imagej.ImageJ instance.

In particular, this illustrates how to get the ImarisService from a new SciJava Context.

ExampleCreateDataset shows how to create a new ImarisDataset, fill it with values, and show it in Imaris. 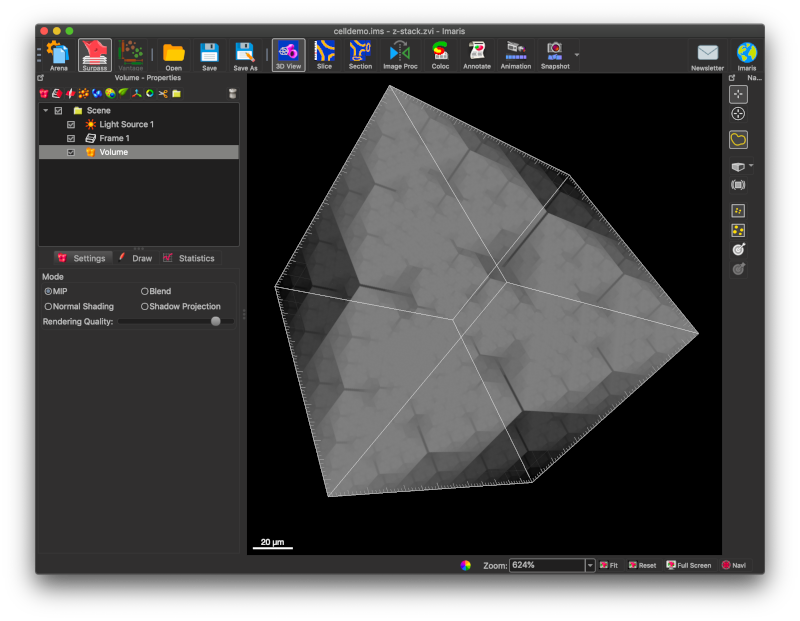 ExampleOp shows how to create Fiji plugins that operate on Imaris images. In particular, the code illustrates that

The ExampleOp command uses the ImageJ OpService to run a Gauss smoothing in X direction on the current Imaris dataset (running in-place, and modifying the dataset). It shows up in the Fiji menu Plugins > Imaris > Smooth X.

Finally, here is the same “smooth in X” operation as a Groovy script:

You can save this to a file called smooth.groovy, then run it from the Fiji script editor, or from the command line

(where FIJI is the path to the Fiji executable.)